We are excited to announce that four Japanese high school students brought home two gold medals and two silver medals from the 51st International Chemistry Olympiad held in Paris, France. The four Japanese representatives competed with 309 students from 80 countries for gold, silver and bronze medals from July 21 to July 30. The number of participants and countries was the largest ever. The competition was composed of one theoretical exam and one practical exam, both of which were to be solved in five hours. Aside from the exams, students participated in excursions that introduced them to the famous places of Paris, such as visiting the Eiffel Tower and the Arc de Triomphe.

The Japanese team results are as follows; 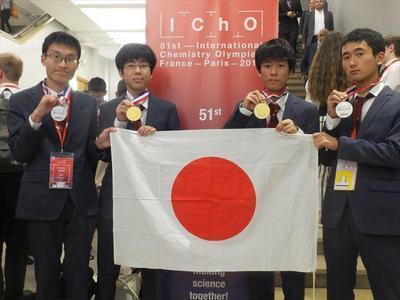