A surfactant-coated oil-droplet can be regarded as a supramolecular dynamic system comprising a surfactant monolayer as an ordered surface phase and a fluid as a disordered phase inside. Owing to such a characteristic structure, an oil-droplet is able to show a unique macroscopic dynamics in a hierarchal manner, initiated from a chemical reaction in the molecular scale1).
We prepared oil-droplets with a diameter around 100 μm composed of a caged oleic acid, 2-nitrobenzyl oleate (NBO), a surface of which was covered with oleic acid/oleate as surfactants in a basic water solution (pH = 9.2)2). When UV light irradiated a fresh NBO droplet, the droplet started to move toward the light source, and a velocity of its one-dimensional movement was accelerated in a non-linear manner.
Accompanied by this macroscopic movement, the inner dynamics of the photo-irradiated droplet exhibited a distinct convection flow as visualized by the real-time optical microscopy. It means that the macroscopic movement is tightly linked with the inner dynamics triggered by UV irradiation, and the linkage induces a non -linear droplet's motion. This characteristic movement of photo-irradiated NBO droplet can be regarded as a phototaxis, which would give a hint to reveal the mechanism of the taxis of a living system. 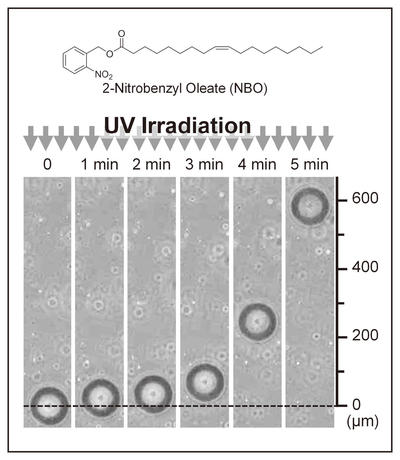