The third class of rhodopsin: Heliorhodopsin

These have a common chromophore, retinal, in the center of the seven transmembrane structures, but microbial and animal rhodopsins have all-trans and 11-cis retinal, respectively. While most microbial rhodopsins carry various ions when they absorb light, animal rhodopsins, as members of G-protein-coupled receptor family, activate intracellular heterotrimeric G-proteins in a light-dependent manner.

For decades, it was thought that rhodopsins in nature could be divided into these two types, but in 2018, an international collaboration including us revealed the existence of the third class of rhodopsins that are different from the known ones and was named heliorhodopsins (HeRs)2). HeRs are found in a wide range of organisms from bacteria, archaea, to fungi and algae, and even in giant viruses. HeRs are also characterized by the inversion of their orientation in the membrane with respect to microbial and animal rhodopsins. However, the function of HeR is still unclear, and future studies are expected to reveal new photobiological roles. 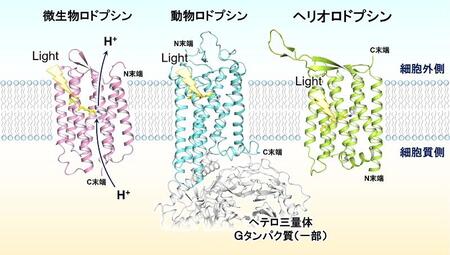 Keiichi Inoue The Institute for Solid State Physics, The University of Tokyo