Ferroelectric behaviour in a single molecule

Ferroelectricity is a bulk property that typically manifests through the long-range ordering of electric dipoles in crystals. However, a single-molecule electret (SME), which exhibits ferroelectric behaviour in a single molecule, was recently reported1). This physical property was observed in a cage-shaped inorganic molecule, namely, Preyssler-type polyoxometalate. The molecule has a cavity that contains a terbium ion (Tb3+). The Tb3+ is localized at one of two off-centre ionic stability sites in the molecule, resulting in molecular polarisation based on the position of the ion (top figure). Since an energy barrier (U) exists for ion transfer (or polarisation reversal) between the stable sites, the position of the ion is fixed in the temperature range below the barrier, and the polarisation direction is maintained. In this temperature range, an electric field can be applied to induce ion migration and reverse the molecular polarisation. In fact, this material behaved as an SME because it showed polarisation hysteresis and spontaneous polarisation at 290 K, even though no ferroelectric transition was observed below 450 K in the temperature dependence of the dielectric constant measurement (bottom figure)1). Recently, a fullerene-based SME has also been developed, and polarization reversal has been observed during single-molecule measurements2),3). In the future, it is expected to be applied in single-molecule memory. 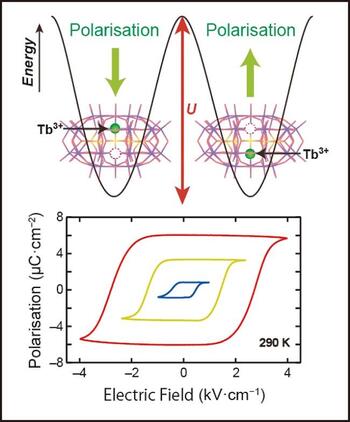